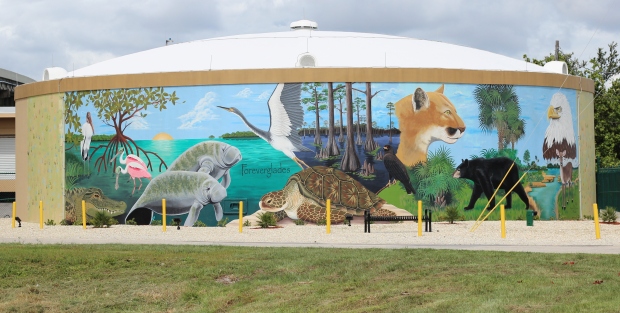 Earlier this year I marked off 3 days on my calendar prior to summer camps starting. While the days remained marked off for months, I never planned on going anywhere. The week prior to the days marked, my buddy Capt Brian Sherman from Louisiana hit me up. He said he would be in Marco Island the next week and had never caught a snook. Well what a coincidence because my marked days magically had plans now.
I left on a Wednesday morning and the night before I ran out with friend Capt Alex Gorichky to do our bi-weekly trout listening study. On my way to him I stopped for a sub and in the parking lot was a woman that could not get her car started. I got her rolling before the storm dropped and when she asked what can she give me, I said a high five. I got that, a hug and a $20 that I tried to refused with no luck. That bought my dinner with plenty of change that I’ll get back to. 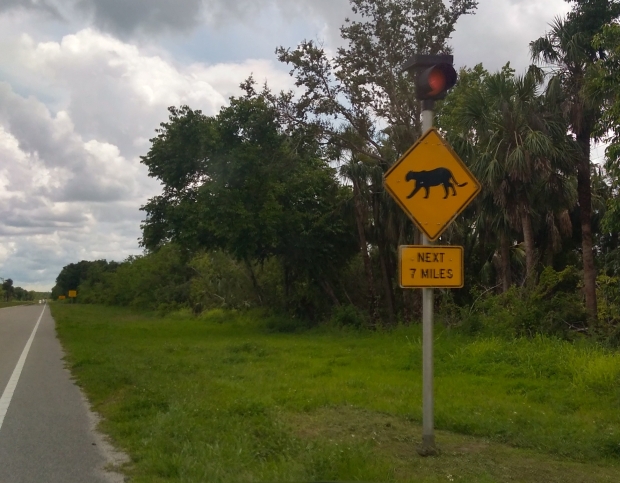 Even for a glimpse, I hope to see a wild one some day.

So I hit the backcountry roads towards Collier-Seminole State Park where I got a campsite for two nights. The backroads can add to your experience opposed to sitting on an massive highway fitting in with the other distracted humans. Incorporate the travel into your getaway and it will be more valuable.

The campground is really nice and June must be mating season for the Eastern Lubber Grasshopper because I probably ran over 34862 on my way down. They were even all over the campground so if you have a fear of massive, clumsy grasshoppers, don’t go in June. The yellow flies were so bad that I bruised my face from slapping them so much. Otherwise the no-see-ums and skeeters were minimal, for a Florida boy. Only advice I can suggest here is not to primitive camp on the side that backs up to the campground side in the wet season because I found sites that flood.

Between my screen and rain fly

After setting camp, I explored the park a bit and found the boat ramp where I casted a line for a bit until I spotted a lure in the tree beside me. That lead to seeing another I couldn’t reach which lead to putting my kayak in and poking around in the bushes. It was very relaxing because I was totally alone, the water was like glass and the sky was beautiful. There was even a rainbow.

eventually lead to this.

Sunlight fell and I was a bit bored so I hit the restaurant next to the park. It’s called Gators’ Crossroads for very obvious reasons. I had a hunch that this might be my kind of place so what started out as a half-hour burger stop turned into a 3 hour hangout session with the bartender and two random dudes. I enjoyed the night with three strangers that you would have thought we’d know each other forever. My dinner bill was $13 and I still had the change from the $20 that the gal gave me for getting her vehicle started so I paid it forward to the bartender and she was stoked. That $20 had now gone full circle and it made me happy. The burger was on point and I ate it at the bar while the big boobed and tattooed bartender yelled cuss words and smoked. That’s my kinda 5 star joint.
I met Capt Brian early the next morning to seek out his goal of catching a snook. I’d never fished this part of the Ten Thousand Islands before but had a pretty good idea on how to. If you know how fish behave, you will know where to catch them. We launched at the NE side of Goodland Bridge and Brian caught his first snook within a half-hour. We went on to catch 10 more species during the day and we had a great time fishing some new-to-us waters. I was even able to land a massive goliath group. Including the hoss grouper, I was able to catch 11 species all on a Vudu Shrimp.  I bid adieu to Brian until I find myself in LA again. 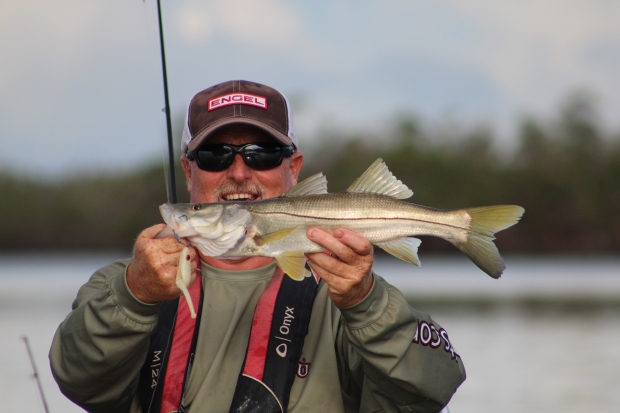 One of Brian’s many snook for the day.

This grouper can grow to well over 500lbs. Good luck, buddy.

A grasshopper infested camp and cold shower sounded pretty rad at this point because it was closing in on 4pm so I made my way back and hooked up a mean PB&J dinner. After that I went exploring for a bit and found a nature trail. The sun was starting to set and it was about a two-mile trail that the ranger said goes in a loop. Never before in my life have I found a loop trail with so many options to turn left or right. Long story short, I totally got lost in the dark but it was colorful sunset. Always find your silver lining. 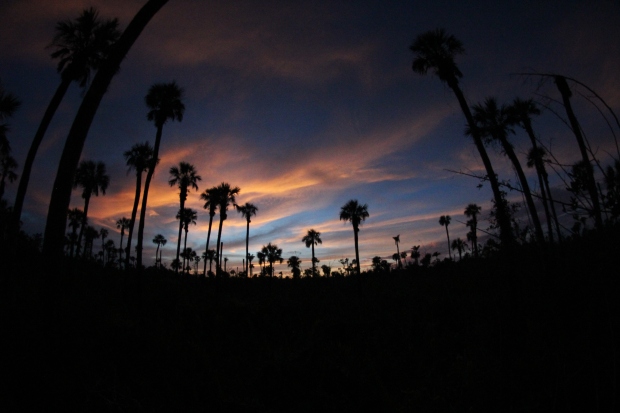 Friday came and I had two options. Option A was to paddle out to the Cape Romano Dome Home and B was to check out Big Cypress National Preserve. I went with B and started to pack camp. One of the reasons I have hope for society is because of the amount of people who try to help me on a daily basis. But as I tell most, I wouldn’t be where I am if I didn’t think I could handle it. So when I was putting the last thing in my truck, Louie from the site next to me came over to ask if I needed help. After saying no thanks, he went back to his site but he said a few things that intrigued me so before pulling away, I asked him some questions. He’s from New Zealand, or was it the Netherlands? I forget but it’s far away and Louie had just come from another far journey. He bought this Harley out of S. Florida a few years back and has been riding it across the county. A total of 13,000 miles on his bike including Canada and Alaska. We chatted a bit about writing and that’s when I noticed the journal in his hand. I’m a big believer in putting positive energy out and receiving positive energy in return. I’m sure that sounds very hippie of me but I was supposed to be traveling across the country this summer and one of the reasons I took this little three day trip was to jumpstart my writing again. The path that Louie and I crossed is an example of positive out, positive in. I can only hope he gained something in return by meeting me. 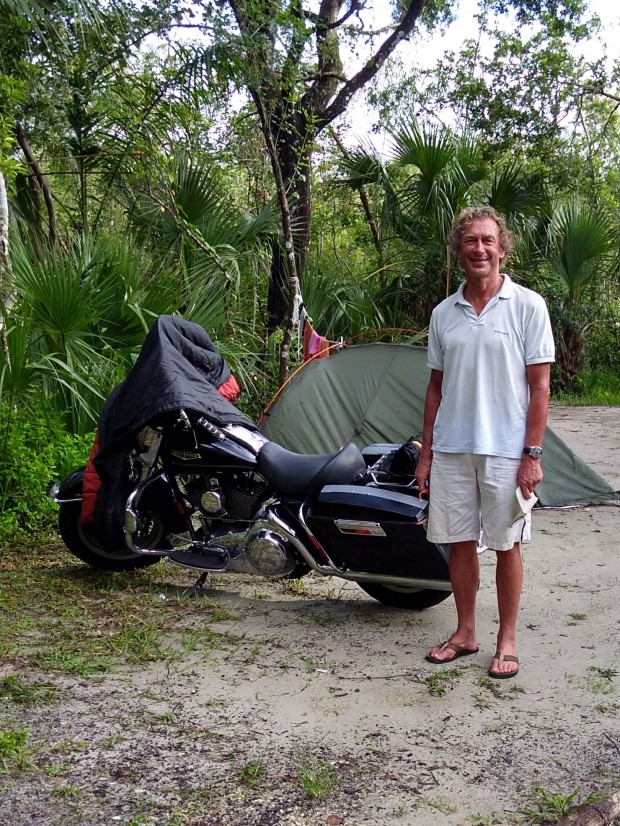 Give me one reason to say, “Fakahatchee” and I bet I’ll be saying it the rest of the day because I’m a child like that. The Fakahatchee Strand State Preserve (free but I donated $3 as a thank you for letting me take photos) is close to the campground, so I stopped in to cruise the trail. I was the only one around, not even a park ranger. The sun was still getting off the ground so the dew mixed with the light coming through the giant cypress was quite purdy. I saw a strangler fig that looked oddly enough like the sculpture in Beetlejuice. I posted the photo and my sister in-law notice it. 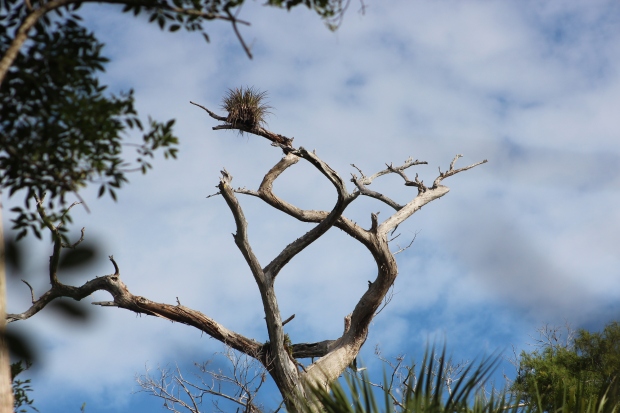 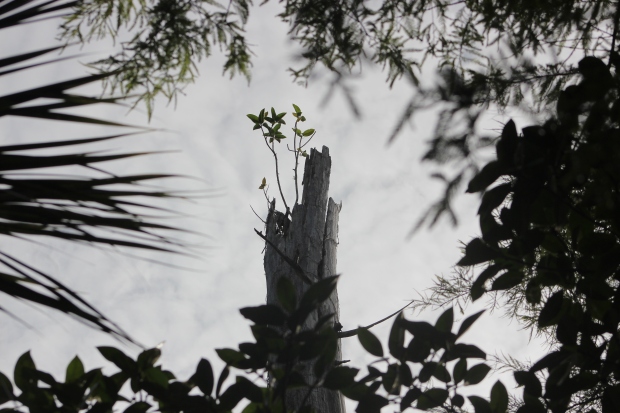 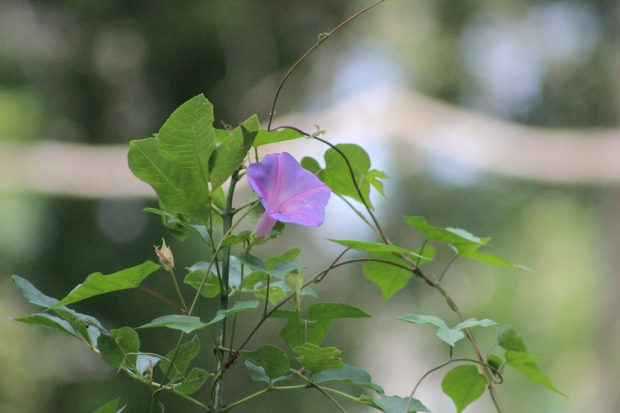 Rolled out of there and down the road more to Big Cypress Preserve (free and I took some cool free maps). It was not what I was expecting and Clyde Butcher’s studio was a little further SE than I wanted to drive to so I started my way back home. It was pretty early and I’d be sitting on the couch for the afternoon if I didn’t think of making the most of this trip. The Audubon Corkscrew Swamp Sanctuary is somewhat on the way back if you drive backcountry so I decided to visit because it’s been on my list. On my way while driving on 29, I thought I spotted my favorite bird in a tall pine. I had to pull off the road and go in reverse for a bit to get a better look and sure enough, a single Crested Caracara was sitting up high. I had the perfect shot with the tinted windows up but as soon as I dropped it, it flew off and this is all I got.

The Audubon Society is truly magnificent, especially when you dive into the actions that were taken to build it. Individuals were killed because they tried to protect birds and the core dedication behind AS is an inspiration. Where would our feathered friend population be without the Audubon Society?

After I paid my $15 fee to get in, I started the trail only to have my free-wheel break. I can manage without it but it’s much more quiet on a boardwalk with it. There’s not much for me to say about this park other than GO if you get the chance. I wanted to find some ghost orchids and I found a few of the plants but no flowers. Just gives me an additional reason to return. The boardwalk is 2.5 miles and while it’s longer than the trail at Collier State Park, it’s hard to get lost. It’s just long so be sure to squirt before going on your walk-about. I’m not too lazy to go into detail about this Florida gem but I do believe that some things you enjoy in life can remain sacred so here are some photos to tease you. So, go check it out for yourself. To mosey off the concrete from time to time will only increase your value for life. You might even get up close and personal with the Florida Panther like THIS GIRL(yes, click this) did on the trail. 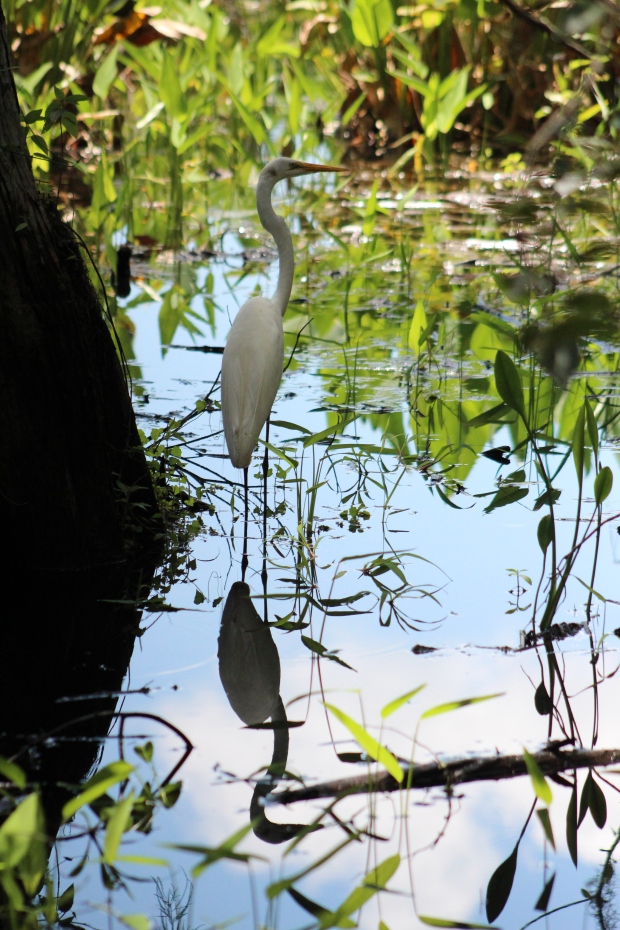 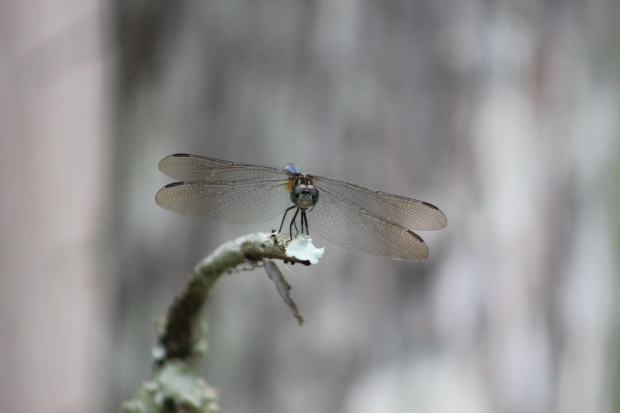 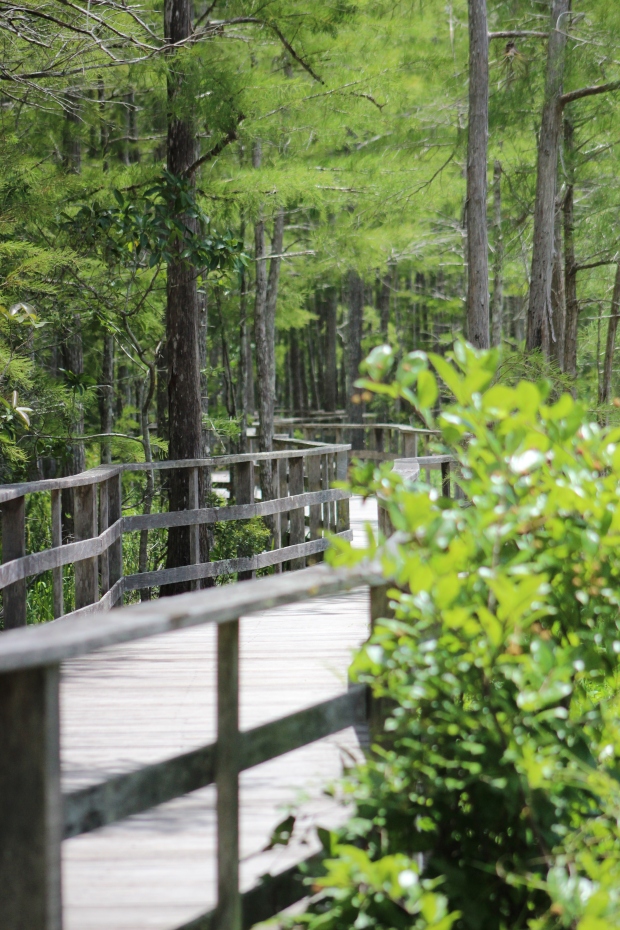 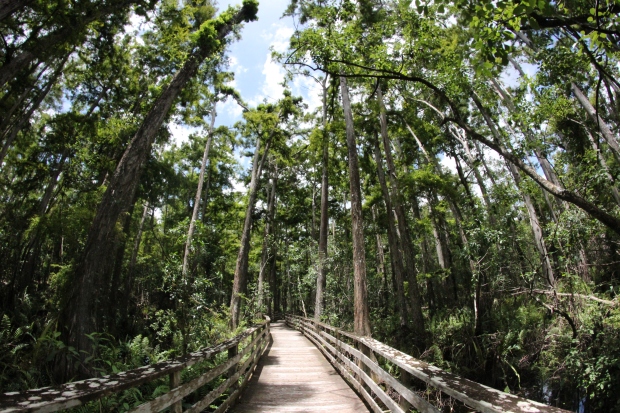 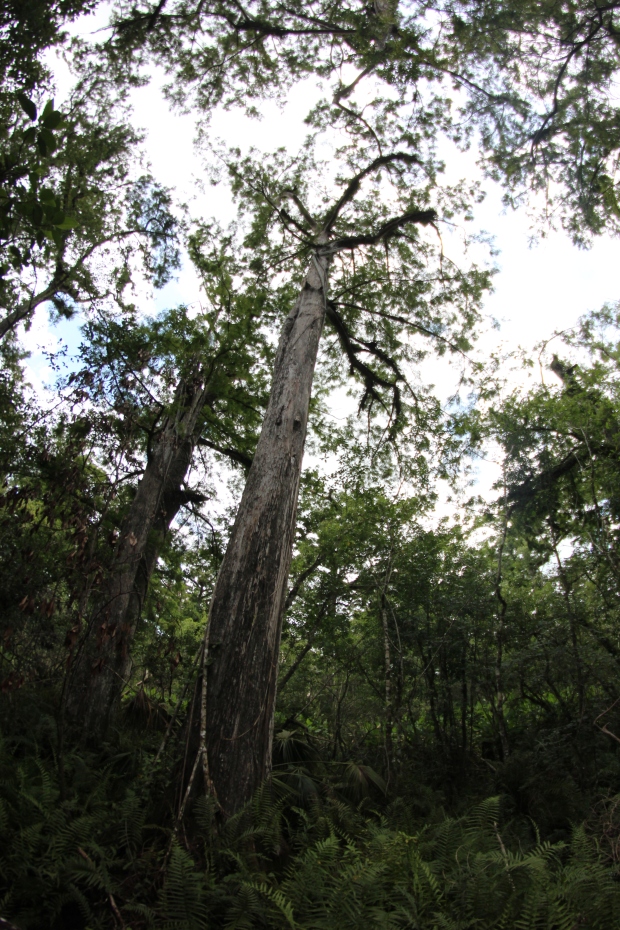 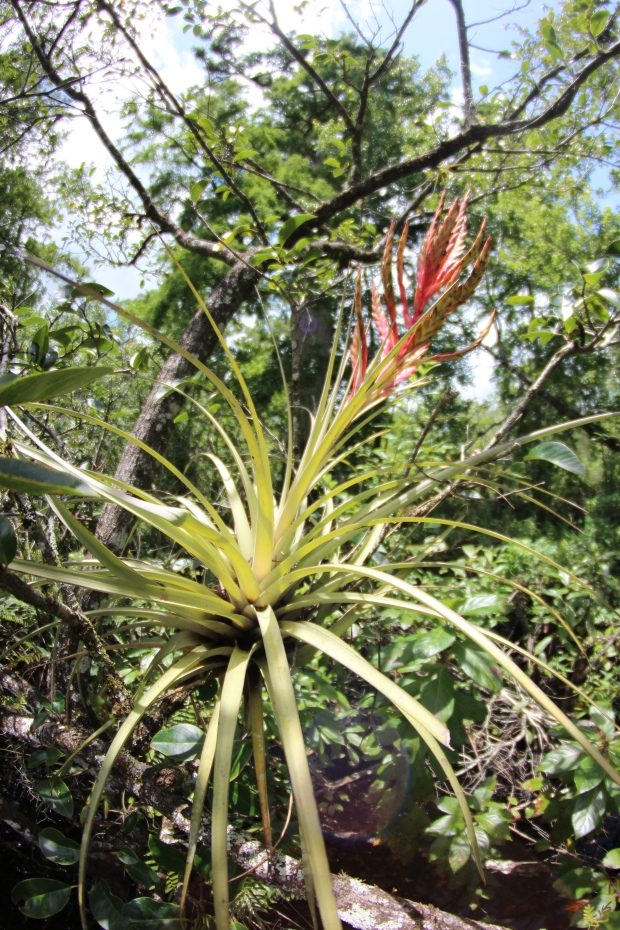 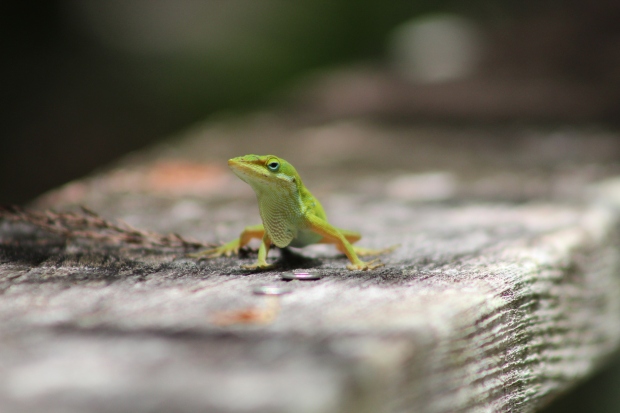 This trip had a lot of hidden meaning for me and is a little dose of what fuels me to keeping moving forward.